Colored Toilet Paper: Why They Were Discontinued, Where to Buy 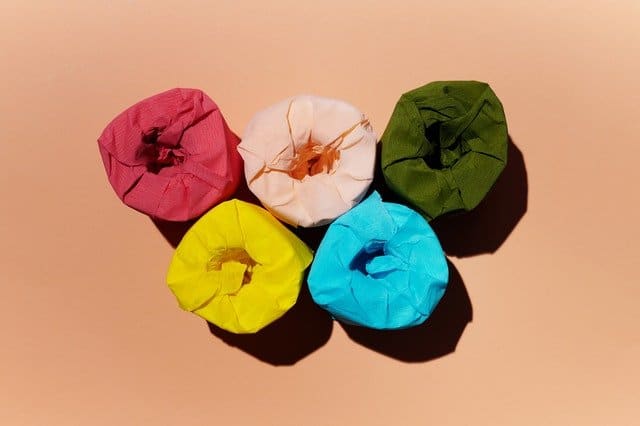 When you are about to walk into any bathroom today, you may not know what to expect but you can always be guaranteed to find a white toilet paper. That was not the case in the 1960s and 1970s though. Colored toilet paper were almost in everything bathroom?

So why did they stop making colored toilet paper? This is a question that has always bugged me and so I decided to dig deeper and find out why.

Toilet paper was introduced into the market in 1857 by Joseph Gayetty of New York. He marketed it as “Medicated Paper, for the Water-Closet’’. This is the time when flush toilets were known as water closets.

Surprisingly, this is many years after the invention of the flush toilet in 1592 by Sir John Harrington. If you have ever wondered why a toilet is called a “John” then wonder no more.

So what did people use before toilet paper was invented? Interestingly, the choice of what to use at that time depended on where you were in life economically.

When was Colored Toilet Paper Invented?

Of course Joseph Gayetty didn’t also invent the colored toilet paper. He didn’t even use one himself. It is important to understand that his “Medicated Paper, for the Water-Closets” was just a minor improvement of the ordinary paper.

Colored toilet paper was introduced in the market in the 1950s and it was an instant hit! It’s good to note that it was not the toilet paper only that was colored. Toilets, bathtub and sinks all came in bright blues and pinks.

Bathroom color coordination was a thing then. Wives expected nothing less of their husbands. The idea of an all-white bathroom at the time would frowned upon.

I don’t wish to get into specifics but we all know that the actual body part or parts where toilet paper is used has very sensitive skin. What could go wrong?

Back in the day, dyes were not very much regulated or regulated at all by any government body. As result, toilet paper manufacturers used whatever dye they could get to satisfy the great market that existed at the time.

Later in the 1980s, doctors in the United States started to warn consumers that colored toilet papers contained dyes that were harmful to the skin. Whether people heeded the doctors’ advice or not I will leave it to your imagination.

What I know is that colored toilet papers started disappearing from stores shelves and immediately replaced by white ones.

Colored Toilet Paper and the Environment.

Although this is reported as one of the contributing factor for colored toilet paper disappearing from the market, I really don’t think it has a lot of weight.

I am not contesting the fact that colored toilet paper dyes were/are harmful to the environment, but merely asking aren’t there other more environmentally-harmful products that are still being produced? Just compare the effects of fossil fuels and/or agrochemicals against toilet paper dye. Which ones are worse?

I don’t think a large number of the population was all of a sudden unable to afford a colored toilet paper forcing manufacturer to change their tact. If they were affording it all that time, what is it that happened in the 80s that made them realize that they were being overcharged for a toilet paper?

This is the one argument that carries weight in as far as I’m concerned. It is not only the colored toilet paper that disappeared but all the other colored bathroom fixtures.

Think about it this way; what people were wearing in the 1950s is not what they wore in the 1990s. That is the nature of life. Styles and fashion come and go.

Although bathrooms fixtures have been all-white since the late 1900s, black ones are starting to come back especially toilets and sinks. Modern black toilets are stylish, bold and more conspicuous.

These black toilet papers have also become very popular. I guess when they said “You can’t go wrong with black” they had done enough research. Black goes well with just about any other color.

Where to Buy a Colored Toilet Paper

As a matter of fact I know someone who can’t use a plain white toilet paper. Renova is the one company that has refused to let the colored toilet paper tradition die. They make toilet paper in many colors with black, red and blue being the most sort after.

These colored toilet paper come at a premium cost so be prepared to spend more. For the people who still believe in them, that is a small price to pay for the satisfaction and convenience they get from them.