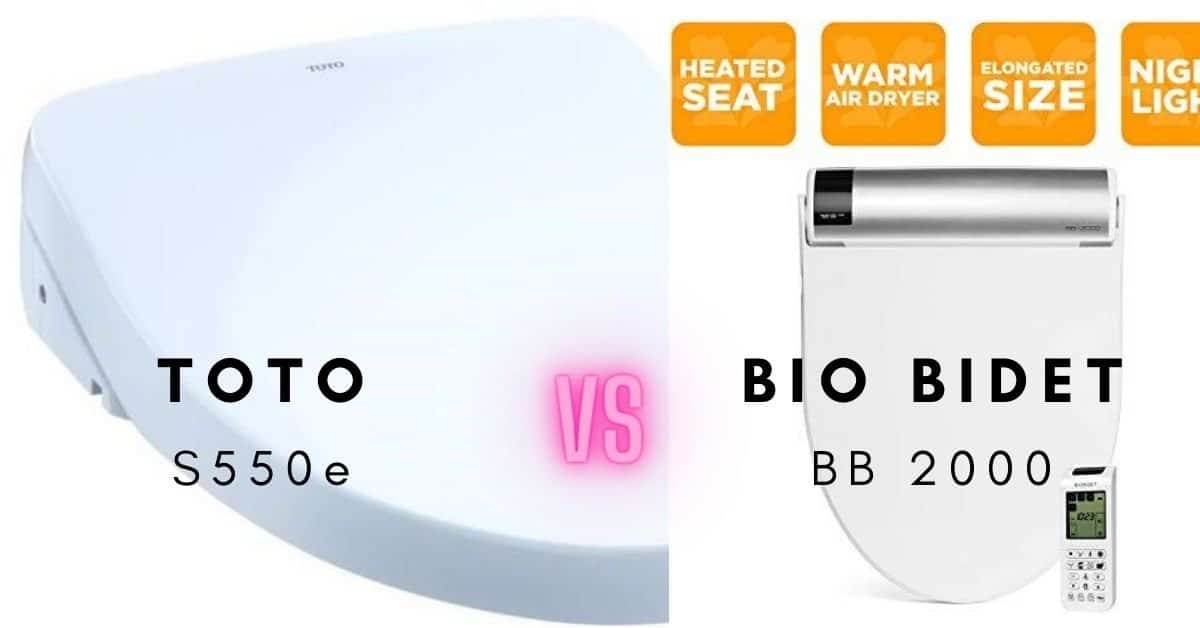 The Toto S550e washlet and the Bio Bidet BB 2000 are 2 of the best bidet toilet seats in the market today. It is therefore understandable if you are looking to buy one of them but can’t just make up your mind on which to settle for.

The purpose of writing this article is to therefore compare and contrast the 2 seats and make the decision easy for you. I will let you know all the nice feature of each seat and also inform you where I feel they underwhelm.

Bidet toilet seats are an improvement of the stand-alone bidets which never made it big in North America. What has made bidet seats more attractive to Americans is that they do not require the installation of a secondary fixture and are more comfortable to use.

The S550e is made by Toto while BB 2000 is made by BioBidet. To have a wider knowledge on these 2 bidets seats, let us look at the companies which make them and the history behind them.

What most people don’t know is that the first electronic bidet seat was invented in the United States by Arnold Cohen also known as “Mr. Bidet”. Cohen wanted to help his father to use the toilet easily due to an existing condition. He later founded the American Bidet Company but just like the stand-alone bidets, Americans still didn’t welcome this invention.

It was also hard to market his bidet seats since the media refused to run his advertisements. The American society was very conservative at the time.

Arnold Cohen travelled to Japan where his idea was warmly welcomed. He partnered Toto, a Japanese toilet manufacturing giant, who produced their first electronic bidet seat in 1964.

Bidet seats became an instant hit in Japan and up to today you will hardly see a Japanese bathroom without a bidet. It is only after bidet seats had become a common thing in pretty much the entire world that Americans started to embrace them.

Toto started selling thousands of bidet seats in North America which motivated other smaller companies to also start production. One such company is BioBidet which was formed in 2008.

The first difference between these 2 is that Toto had been making and selling bidet seats for way too long before BioBidet was formed. You could therefore say they know what works and what doesn’t in as far as bidet seats are concerned.

Despite their late entrance to the market, BioBidet learnt and improved their craft fast. The fact that the Bio Bidet BB 2000 is one of the most popular high-end bidet seat is testament to that.

Now let us look at the other features of the Toto S550e washlet and Bio Bidet BB 2000 that set them apart.

The Toto S550e is only available for elongated bowls in either a classic or a contemporary style. The contemporary style is the modern style with a flat lid while the classic elongated seat features a beveled end. This design is only found on the lid and is for aesthetic purposes only.

The Bio Bidet BB 2000 bidet seat is also available in a contemporary elongated style. There isn’t a classic design for this seat.

You can opt to have the S550e either in cotton white or Sedona beige. Bio Bidet BB 2000 is available in white, with a sliver trim at the top (pearlescent finish).

The two nozzles can be adjusted forwards or backwards to clean over a wider area. It is also a nice feature to cater for people of different sizes.

Another common feature between the 2 nozzles is that they also offer a pulsating and an oscillating wash. A pulsating wash involves the exchange between strong and soft water streams which creates a relaxing massage sensation.

An oscillating wash is when the nozzle moves back and forth in quick succession to clean over a bigger surface area. The oscillation wash can be run concurrently with the other wash options.

Toto S550e offers an adjustable spray width option. You can choose to have either the feminine or posterior washes with a narrow and strong stream to focus on a certain spot or a wider and soft spray stream to cover a wider area.

The Bio Bidet BB 2000 does not have an adjustable spray width. Its feminine wash hole is however wider than the posterior wash, and therefore naturally has a wider spray stream.

A great feature in the Bio Bidet BB 2000 is their patented vortex enema wash. This wash ejects a thin but strong whirling stream of water that is very in effective alleviating constipation. Toto S550e does not have this function.

Both of these nozzles eject warm water whose temperature and pressure can be adjusted. When each is operating at a maximum level, the Bio Bidet BB 2000 nozzles has a more powerful water pressure of 0.18 gallons per minute against the Toto S550e’s 0.11 gallons per minute.

After you are fully cleaned, each of these bidet seat will dry you using a warm air dryer whose temperature can also be adjustable. An automatic air deodorizer on each seat will take care of any lingering odor leaving the room spelling fresh.

The 2 nozzles will self-cleanse before and after every use. The self-cleaning function happens on the seat’s back compartment. When you notice water dripping from the back of the seat and into the bowl, just know the nozzle is running a cleaning function and not a case of a leaking seat.

The Toto S550e however goes a step further than the Bio Bidet BB 2000. It user Toto’s Ewater+ to sanitize the nozzle. This involves the use of electrolyzed water which keeps both the nozzle and the bowl germ-free.

When you have an electronic bidet seat, you need it to clean you with warm water throughout for as long as you want. This posed a challenge to bidet seat manufacturers in the beginning.

With instant water heating, you are guaranteed of endless warm water supply but there is no guarantee that the initial stream of water would be warm. Cold water shocks is something that has happened to most people.

The alternative to instant heating is a bidet seat with a warm water reservoir at the back. Such a bidet seat will not shock you with a cold water stream but the warm water lasts for about 30 seconds and then starts getting cooler.

You therefore cannot enjoy a slow and long cleansing. This system must also keep the water in the reservoir warm throughout the day and is a result not vey energy efficient.

Toto, being the oldest manufacturer of bidet seats does not have this problem and even though the S550e uses an instant heating system its water is warm from the word go with little to no lag time.

Bio Bidet took another path and designed the hybrid heating system which features a small inbuilt warm water tank at the back and also an instant heating system. As soon as the warm water in the tank is used up, the instant heater kicks in and hence an continuous supply.

Both of these bidet seats therefore guarantee you an endless supply of warm water.

This feature is only present in the Toto S550e. A sensor on the right side of the bidet seat will notice when you approach the seat triggering the lid to raise automatically. This is a great feature especially if you don’t water to hand the seat with your bare hands and also for people with limited mobility.

The Bio Bidet BB 2000 however offers a soft/slow closing toilet seat and lid function. Just give the lid/seat or both a slight push and let them come down on the bowl slowly. Another great feature to get rid of the irritating seat slamming sound.

If you need to raise and lower the seat (not just the lid) in the Toto S550e, a button at the back of the remote control is all you have to press.

A toilet seat nightlight illuminates the room making it easy to navigate your way to the toilet at night. This feature helps to not lose sleep by turning the otherwise bright bathroom lights. It is also pretty cool.

The nightlights in the Toto S550e and the Bio Bidet BB 2000 are however different. Whilethe S550e the nightlight illuminates the inside of the bowl, the BB 2000’s nightlight is rather small and on the side where the auxiliary control buttons are located.

Again, this feature is found in the Toto S550e but absent in the Bio Bidet BB 2000. So what is Premist?

Before you use the toilet, the seat mists/sprays the bowl with water which leaves it wet. This prevents the sticking of waste on the toilet bowl which makes it easy to keep the toilet clean.

A wet bowl is also more efficient while flushing than a dry bowl. This feature is especially helpful for people who often or normally have sticky poop.

A heated toilet seat on a cold winter morning is not an offer most people will refuse, if any at all. Both the Toto S550e and Bio Bidet BB 2000 comes with this function. If not needed, you can also turn this function off.

Each of this bidet seats comes with a wireless remote control. The Bio Bidet BB 2000’s remote control is somewhat bulkier compared to the S550e’s. It is one-sided, has an LCD screen and also uses raised buttons. You can choose to have it in either black or white to suit your bathroom décor.

The Toto S550’s remote control is sleek and dual-sided. It uses capacitive touch buttons with its main features being on the front side. On its back it has more features as well as an LCD screen.

A user presets lets you select and save all the wash functions you need so that you don’t need to keep selecting every time you use the toilet.

For items as expensive as these ones, a warranty is important. Make sure that you buy a genuine product from an authorized dealer for your warranty to be recognized by the manufacturer. Note that a warranty comes into effect from the day of purchase.

The Bio Bidet BB 2000 comes with a 3-year full warranty. For an extra charge, you can also extend the warranty conditions to 6 years.

The Toto S550e comes with a 1-year full warranty. Toto does not extend their warranty conditions even at an additional fee.

Apart from having a higher weight capacity, the Bio Bidet BB 2000 is also slightly wider and longer than the Toto S550e. It is therefore more suited for bigger and heavier people.

Although both the Toto S550e and Bio Bidet BB 2000 are considered high-end bidet seat, the S550e is considered more high-end than BB 2000. It is therefore more expensive than the BB 2000.

One thing you have to remember is that Toto is a bigger brand than Bio Bidet. Most consumers therefore trust it and they are in return using their popularity and goodwill as leverage to increase their profit margins.

As I had said in the beginning, Toto has been making bidet seats longer than any other company. They therefore know more about bidets than anyone else and can justify their pricing.

In summary, let us see why you should consider one bidet seat over the other.

These are other worthwhile reads.

Both the Toto S550e washlet and the Bio Bidet BB 2000 are decent and high-end bidet toilet seats. Whichever one you end up buying will surely make your life easy and comfortable.