Types of Bidets: Understand Everything About Bidets 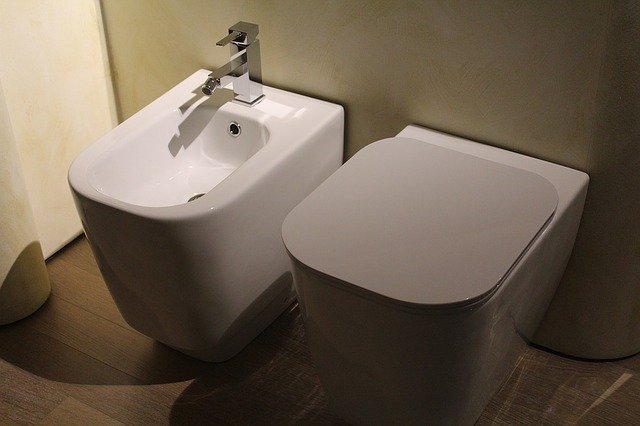 What is a bidet?

There are many types of a bidets but basically a bidet (pronounced as bee-day) is a bathroom fixture that is used to clean one’s posterior or/and feminine parts after using the toilet.

Depending on the type of bidet you have, you will get cleaned using warm or cold water. High-end bidets will use a warm air dryer to dry you after cleansing while you will need to dry yourself with a towel or toilet paper while using other types of bidets.

The following are the different types of bidets:

So, among the 6 types of bidet toilet seats, which one is the best option for you? Let us go through each and every one of them to find out.

Stand-alone bidets are oval-shaped porcelain bathroom fixtures that are installed close to the toilet. They look like a toilet bowl but without a seat.

Stand-alone bidets are the oldest form of bidets. They were invented in France in the 1700s. According to Toilet Paper History, they were also known as “pony” because users had to straddle them the way you straddle a horse in order to use them.

They were initially used by French royals and the wealthy French citizens. After a while, they were installed in more citizen’s bathrooms and afterwards spread across the entire Europe, Asia and South America.

There are a few theories which explain the dislike for bidets by Americans:

Americans citizens travelling abroad are always stunned by the popularity of bidets in Europe and Asia, especially Japan. Citizens from those countries are similarly surprised after landing in America and almost finding no bidets in every bathroom.

Stand-alone bidets look almost the same but have a few differences. You will notice that some have 3 faucets while other have 2 or even 1. The faucets are at the back of the bidet and basically give you the option to choose the water temperature and pressure that you are comfortable using.

You will notice a towel hung close to the bidets. Do not use it to dry yourself. The towel is only used to dry your hands. Dry yourself with toilet paper. If the bidet is however in your bathroom, you can have a dedicated towel for drying yourself.

Always wipe with a toilet paper before using a stand-alone bidet. You do not want to leave any fecal matter embedded on the bidet. You should also never throw toilet paper in the bidet. Unlike a toilet, a bidet cannot flush. This would result in clogs. Always leave the bidet clean for the next user.

The disadvantages of stand-alone bidets are:

What many people don’t know is that bidet toilet seats were actually first invented in the Unites States. In the 1950s, Arnold Cohen aka “Mr. Bidet” invented the first electronic bidet to help his father to clean himself after using the toilet due to an existing condition.

He wanted to start mass production and sale of bidet seats in the USA so he founded the American Bidet Company. Unfortunately, his invention was not well received by Americans and therefore did not take off.

He travelled to Japan and partnered with Toto, the biggest toilet manufacturer in the world. In 1964, Toto unveiled their first electronic bidet seats. Due to wide scale usage of the stand-alone bidets, bidet toilet seats did well in Japan and pretty much the rest of the world.

It is only in recent time that bidet toilet seats have started registering more sales in North America. The main advantage of bidet toilet seats is that you do not need to rip apart you bathroom floor to install a new fixture. Just remove your existing seat and install the new one.

The main advantages and features of bidet toilet seats (electric) are:

A bidet toilet combo is a combination of a toilet and a bidet toilet seat. These are mostly one-piece compact toilets that offer some of the best features you can ever find in a toilet. Due to their high-end nature they are normally very pricey.

Most bidet toilet combos offer a complete hands-free operation. From the time you enter the bathroom to the time you are leaving you do not need to use your hands at ant 1 point.

Sometime back I wrote a detailed guide on the best bidet toilet combos. If you would be interested in checking them out read it here.

A hand-held bidet sprayer consists of a spray head, bidet hose and a T-valve. It is an inexpensive bidet but comes with limited features.

A hand-held bidet sprayer comes with a wall-mount which you can mount on the wall adjacent to the toilet or on the toilet tank. Its spray head looks almost like a shower head but it has a trigger on top.

To use a hand-held sprayer bidet, pass the spray head between your legs or from the rear and pull the trigger. You should always pull the trigger gently as the water pressure might be higher than you may anticipate.

Also, remember to always hold the spray head at an angle, such that the waste will fall down into the bowl and not pushed sideways or upwards. Dry yourself using toilet paper. If the sprayer bidet is in your house you can dry yourself with a towel.

Bidet attachments look like bidet toilet seats only that they come without a seat. They attach between your existing toilet seat and the bowl. On one side, they have an arm with a dial or two which helps you regulate the nozzle functions.

Bidet attachments are really inexpensive and can be installed for a fraction of what bidet toilet seats costs. They don’t have as many features as bidet toilets seats but they offer the primary function which is rear and front cleansing.

Although most bidet attachments use cold water for cleansing a few of them are designed in such a way that they can either clean you with cold or warm water. If you would be interested in such check out the Luxe Bidet Neo 320 bidet toilet attachment.

A portable bidet which is also known as a bidet bottle is a simple plastic bottle with a screwed in nozzle at the top. It is a great alternative to toilet paper while you are out camping or just about anywhere outdoors.

Bidet bottles are lightweight and hence easy to carry around. They will easily fit in a backpack which I think is very convenient. Using a bidet bottle is also pretty easy.

To use a portable bidet, fill the bottle with water and screw in the nozzle. After you have already done your business, put a finger on the nozzle to prevent splashing. Aim the spot you need to clean and remove your finger. Squeeze the bottle to increase the water pressure.

Why You Should Install a Bidet

There are so many advantages of having a bidet no matter the type. Some are so obvious while some are not. The following are the main reasons why you should have a bidet:

I often have people ask me “Are bidets sanitary”? And my reply is always “Do you clean your toilet with water or wipe it with a towel”? The truth of the matter is that you can’t compare a bidet with toilet paper. Without being too graphic, I will remind you that toilet paper does not remove everything.

Toilet paper and wet wipes are the biggest cause of toilet clogs. Excessive use of toilet paper leads to accumulation at the toilet trap which cause constant toilet clogging. With a bidet, especially an electric bidet seats you will not have to deal with this problem.

3. Best for People with Limited Mobility

Disabled people or seniors will find bidet toilet seats very helpful as they will not need to perform the various movement tasks like reaching for toilet paper or even wiping. This will greatly improve their quality of life.

High-end bidet toilet seats or bidet toilet combos are guaranteed to offer you high levels of comfort. Features such as a heated seat, pulsating wash, warm air drying and many more will without a doubt make your life better.

5. Gentle on the Skin

The particular part of the body where we use toilet paper on has a very sensitive skin. Water is softer than the softest toilet paper you can find. The warm water from bidets offers a soothing feeling for people suffering from hemorrhoids too.

If you need to install a bidet and have a decent budget to work with, a bidet toilet seat seems like the best investment. Bidet toilet combos are also perfect but will generally cost more. For people who are cash-constrained, a bidet attachment is a great option.

Author: toilethaven
Filed Under: Uncategorized
How to Easily Install a Bidet Toilet Seat
The 7 Best Toto Toilets – For Superior Flushing
Searching is in progress