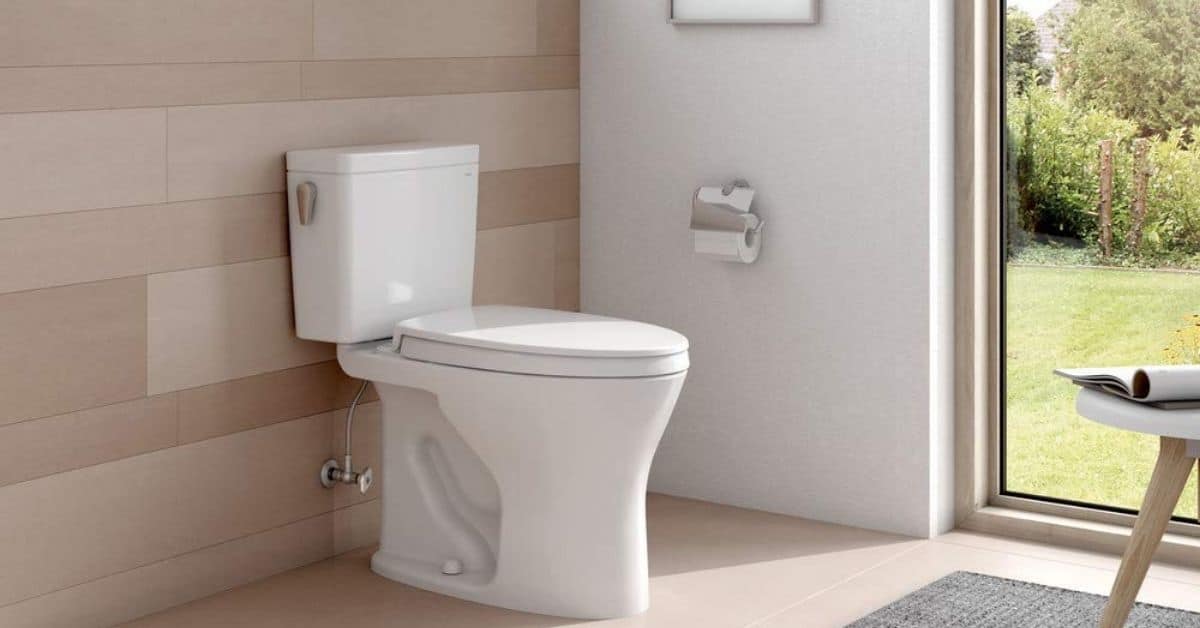 Toto Drake II is one of the best flushing toilets not in only among other Toto toilets but across the industry. What are its features? Is it the best toilet to buy or are there other better choices?

Toto Drake II is a two-piece single flush elongated and WaterSense comfort height toilet. It is a high efficiency toilet with a consumption of 1.28 gallons of water per flush using Toto’s Tornado flushing system.

The sleek two-piece design, high water-efficiency, powerful flushing, universal/ADA height and compact size is what makes Toto Drake II a great toilet. It is however a little bit more expensive than most toilets.

Let us start by looking at the features and specifications of the Toto Drake II.

This system involves the use of a rimless bowl, with no rim holes as is the case with most toilets. Instead, it has 2 powerful nozzles, one on each side of the bowl. It combines the 2 nozzles with a 3-inch wide flush valve (instead of the usual 2-inch flush valve).

The use a wider than usual flush valve ensures that water from the tank is dumped inside the bowl faster and forcefully. As the water enters the bowl it forms 2 powerful cyclones on each side of the bowl (and hence the name double-cyclone) due to the orientation of the nozzles.

Apart from creating a powerful flush, this system is also very effective in bowl scrubbing and rinsing. It ensures that there are no spots on the bowl that have not been cleaned during the flushing cycle.

For every flush, Toto Drake II toilet uses only 1.28 gallons of water. It is therefore compliant with the requirements of the EPA WaterSense as well as CalGreen and can hence be sold everywhere within the United States including California and Texas..

I consider Toto Drake II to be one of the best two-piece toilet. The others I can think of is the Toto Vespin II, American Standard Cadet 3 Flowise and Kohler Cimarron.

When you buy a two-piece toilet like the Toto Drake II. It will be shipped to your address in 2 different boxes, one with the bowl and the other one with the tank. Sometimes the boxes arrive on separate days. If you receive one box just be patient as the other box might be arriving the next day.

As much as these can be inconveniencing, it reduces the chances of the toilet breaking during transportation. As a matter of fact, one-piece toilets tend to break more often than two-piece toilets during shipping. This is because of the size and weight of the one-piece toilet that has to be shipped in one big box.

One main advantage of two-piece toilets is that if one piece (either the tank or the bowl) cracks, you would only need to replace the broken piece. With a one-piece toilet you must replace the entire toilet which is not cheap.

A two-piece toilet’s tank is joined to the bowl using bolts. There is also a tank to bowl gasket that prevents leaking between the tank and bowl during flushing. With time, the gaskets becomes worn out and bolts corroded or loose.

These results in toilets leaks and a repair would need to be done. If that is not something you can do for yourself you would have to call in a plumber which is not cheap. One-piece toilets do not have such issues hence it’s true to say a two-piece toilet like the Toto Drake II requires more maintenance than one-piece toilets.

The most popular model of the Toto Drake II is the elongated model. Few people actually know that a round Toto Drake II model exists.

Round toilets bowls are not without their own advantages. They are mostly preferred by people with small bathrooms as they are more space-economic than elongated toilets. In case you would be interested in the Toto Drake II round toilet check it out here on Amazon.

I have also written a separate article comparing the pros and cons of elongated vs round toilets in details. Read it here.

Toto Drake II just like other modern Toto toilets is coated with Toto’s Cefiontect glaze, commonly known as Sana gloss. This smooth glaze inhibits the adherence of dirt, mold, bacteria and any other organism making toilet cleaning easy without using any harsh chemicals.

It also prevents your poop from sticking on the toilet bowl. I’m sure you have seen it in old toilets where you use a toilet and you have to scrub it to remove the poop marks left on the bowl. Cefiontect glaze makes the bowl smooth like a mirror such that poop does not stick.

Toilet dimensions are critical. It is important to make sure that prior to buying a toilet it is going to fit in your bathroom space, and that it will be comfortable as well.

The dimensions of the Toto Drake II are:

Toto Drake II is not a very compact toilet but neither is it too big. It will fit in most bathrooms without a problem. It also comes with a standard 12-inch rough-in.

The one thing to notice here is that Toto Drake II is a comfort height toilet. With a bowl height of 16.125 inches from the floor, its seat height will increase to 17.25 inches which falls between the 17 and 19 inches required by the Americans with Disabilities Act (ADA).

Comfort/ADA toilets like the Drake II are also known as universal/right/chair height toilets. They make it really easy to sit and stand from a toilet especially by the seniors and old folk.

Toto also sells the Toto Drake II with a washlet. A washlet is a Toto bidet toilet seat. You can choose the Toto washlet you want to go with your Drake II starting with cheaper options to high-end models.

A washlet, although expensive cleans way better than toilet paper. It uses warm air-infused water with adjustable temperature and pressure to cleanse you and after that dry you off with a warm air dryer.

If you would be interested in one such offer check it out here on Amazon.

Toto Drake II is the improved/deluxe version of the Toto Drake. It is sleeker, more water-efficient and overall better-looking than the Toto Drake albeit being pricier.

Residents of some states like California and Texas cannot buy the Toto Drake since the states requires toilets sold there to use 1.28 gallons of water per flush or even less.

Another difference between these 2 toilets is in the design of the tanks. When you look at Toto Drake II’s tank, it is uniform in size from top to bottom and the front appears to be curved. This makes the Drake II to look really sleek and elegant.

With the Toto Drake, the toilet tank is narrow at the bottom and wide at the top with the front being flat. It is also way bigger than that of the Drake II. To be more specific, the width of the Toto Drake II’s tank is 17.25 inches compared to Toto Drakes’ which is 19.875 inches wide.

Toto Drake II’s toilet bowl is also uniform in width from the front to the back while that of Toto Drake is a bit narrow at the back. When it comes to aesthetics, Toto Drake II is without a doubt the clear winner.

The dimensions of the Toto Drake are:

From the dimensions above, we can notice that Toto Drake II is more compact than Toto Drake II. Although both are comfort height toilets, Toto Drake gives you the option to sit higher with its 16.5-inch high bowl compared to Toto Drake II’s 16.125 inches.

Toto Vespin II is the skirted model of the Toto Drake. All of their other features are similar. A skirted toilet is one whose trapway is concealed and the bowl appears to be in a skirt.

The advantage of a skirted toilet other than the aesthetics is the ease of cleaning the it. This design eliminates the nooks and crannies otherwise found around a toilet bowl making cleaning the toilet a cinch.

Another advantage of the Toto Vespin II just like any other skirted Toto toilet is that although it is a 12-inch toilet, it can be converted into either a 10 or 14-inch rough-in toilet. You only need to buy the Toto Unifit adapter.

I have written more on the comparison between the Toto Drake II and Toto Vespin II in a different post. Read it here.

I have also written a detailed comparison between Toto Ultramax II and Toto Drake II in another post. Check it out here.

The Champion 4 is one of the best flushing toilets not only among other American Standard toilets but across the industry. It uses a 4-inch flush valve and an extra-wide trapway to dump water in and out of the bowl forcefully.

The main difference between Toto Drake II and American Standard Champion 4 is that the Champion 4 uses 1.6 gallons of water per flush compared to the Drake II’s 1.28 gallons per flush.

While Toto Drake II can be sold everywhere within the United States, American Standard Champion 4 cannot be sold in Texas, California and Colorado. It is not WaterSense compliant/labeled.

Another difference is that the Bowl height of the Champion 4 is 16.5 inches from the floor. A Champion 4 user will therefore sit higher than that of the Drake II.

The dimensions of the American Standard Champion 4 are:

In summary, Toto Drake II is a great toilet because of:

While Toto Drake II is expensive than most toilets in the market, you will without a doubt get value for your money.