Best Type of Toilets For A Basement Bathroom?

Many houses today have finished basements, and many use them for various things: game/activity or play area, more bedrooms, master bedroom, and more. Because so many people spend a lot of time in finished basements, it would be convenient to have a bathroom within that area. So, what toilets would do a basement bathroom justice?

There are a few options to choose from in regards to a toilet for a basement bathroom, allowing for the household needs for the particular toilet to be met. The main two types of toilets recommended for a basement would be a pressure-assisted toilet or a macerating/Upflush toilet.

How are these toilets different? What are they like/How do they work? What types of toilets fall into these categories? We will answer these questions below.

Pressure-Assisted Toilets – How Do They Work?

Pressure-assisted toilets are very similar to regular standardized toilets or gravity flow toilets, but a rather key factor sets them apart. Gravity flow toilets work pretty much just as their name implies, as they rely on the water in the tank of the toilet and the gravity of the earth to push the water and anything else that is in the toilet bowl down and into the pipes to the sewage system.

A pressure-assisted toilet has a second tank within the main one that helps with additional air pressure to help the toilet flush and still maintain a bit more water in the toilet bowl while flushing. At first, these toilets were only known for commercial use. However, many non-commercial toilets nowadays are also pressure-assisted. 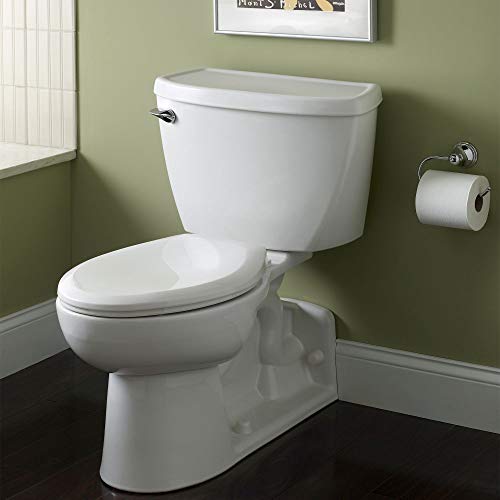 There are a variety of pros to using or having a pressure-assisted toilet. Since it uses and creates additional air pressure when flushing, it’s perfect for flushing more waste and is water efficient. It also won’t clog very often, which is quite nice.

These toilets also have most of their water within the toilet bowl, helping it stay cleaner for longer and reducing the time it would take to clean since it won’t need to be cleaned as often as a gravity-flow toilet. The pressure-assisted second tank in the main tank won’t add any humidity or condensation to the bathroom, which prevents mold from growing.

However, as with any pros, there are also a few cons to using or having a pressure-assisted toilet. Since there’s more power behind the flush in these toilets, they will also be louder than the gravity flow toilets. They are also rather limited in where you can find the parts for them if they need to be fixed, so you will likely have to pay more to have it repaired, and it may take a while to receive the necessary parts.

Related Article: PRESSURE-ASSISTED TOILETS: EVERYTHING YOU NEED TO KNOW

Macerating/Upflush Toilets- How Do They Work?

Macerating/Upflush toilets are rather different from both gravity flow toilets and pressure-assisted toilets since they’re mainly used as a solution when the sewage pipes or lines are above the basement floor. For full basement bathrooms, there are also a few models that can handle drainage from the sink and shower, meaning you will have to do less work and can remodel your bathroom rather cheaply because you won’t need to make modifications to the sewage line.

While most toilets, including gravity flow and pressure-assisted toilets, have a 3 to 4-inch hole in the floor where they empty, a macerating toilet empties out the rear into a tank that contains a macerator and a pump. 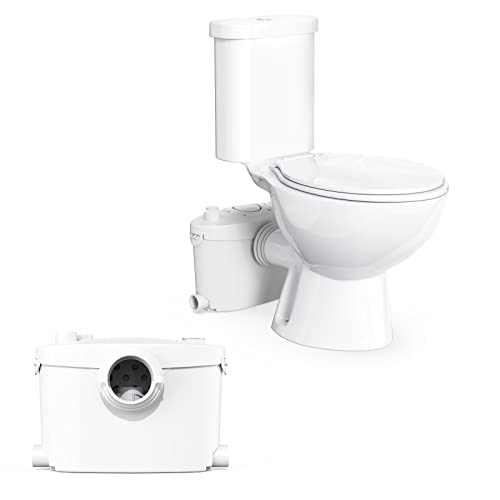 This tank has a preset level, and once the amount of waste in the tank reaches that level, power switches on, and the blades reduce the waste to a slurry consistency before it’s pumped out of the tank through a 3/4 to 1-inch PVC discharge pipe that’s been safely and properly attached to the sewer line.

The main models of macerating toilets can handle human waste and toilet paper, although there are a few more expensive models that can handle larger things such as feminine hygiene napkins due to these models having a grinder pump. And as mentioned earlier, some models also will include auxiliary inputs to allow for drainage from the shower and sink in the bathroom.

There are pros and cons to macerating toilets, we’ll go over the pros first. Since there’s no need to install a sewer, there’s quite a lot of design flexibility for the bathroom. If space is a concern, the tank can be installed in/behind a wall as well!

Most macerating toilet bowls are made of easy-to-clean porcelain, so cleanliness shouldn’t be an issue! And it’s said by manufacturers that these products can last up to ten years, but lab tests suggest they may be able to last up to thirty years. It should be fairly easy to install and uninstall, allowing for portability.

The cons of this type of toilet have some similarities to those of the pressure-assisted toilet. The main one is that it can be a bit loud or noisy due to the pumps, especially if your particular model has a grinder pump.

Because the blades in the tank use electricity to work, macerating toilets are considered electricity dependent, so don’t use it if your power goes out. They are rather prone to clogging, which can be problematic if you didn’t provide easy access to the tank and macerator. Macerating toilets also need to be flushed regularly to keep the pump primed, so if it’s left unused, it needs to be re-primed before use. 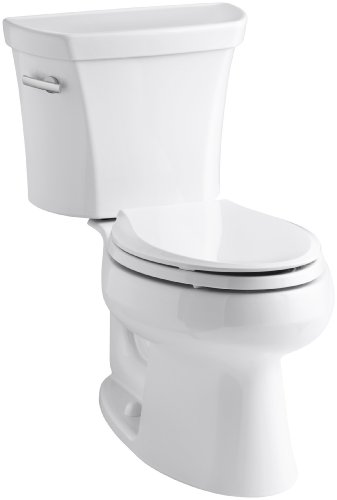 If your looking to save some space in your basement bathroom but still wish to have a pressure-assisted toilet, the Kohler San Raphael would be a great choice! It’s a single-piece toilet with a low-profile tank. 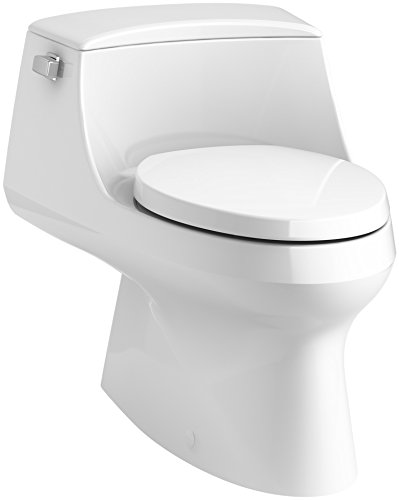 This allows it to be the perfect toilet in compact bathrooms, and since it’s so condensed, there are fewer crevices and hard-to-reach spots between the tank and the bowl to clean! The Kohler San Raphael model also has a rather quiet flush and only uses a gallon of water with each flush.

The Geberit .8/1.6 GPF Dual Flush 2-Piece Elongated Icera Toilet is a rather expensive model. However, if you liked the possibility of a hidden tank in the wall like the macerating toilets but still want a pressure-assisted toilet, this would be the toilet for you!

Not only does it give the appearance of saved space in the bathroom, but it also comes with a wall plate to use for flushing with both liquid and solid waste options. The tank will be hidden behind the wall, but it uses 1.6 gallons of water with each powerful flush.

Saniflo is a very popular brand in the plumbing market, so it’s no surprise that they have a variety of options for macerating or Upflush toilets. The Saniflo Saniaccess 3 is a wonderful model that has a powerful pumping system and an elongated seat.

The model is also compact, making it a wonderful toilet for smaller spaces. Since most areas sell the kit, it’s easy to install on your own, or you can pay someone to do so instead. It is said to have a rather loud flush, so keep that in mind!

Liberty Pumps is another well-known manufacturer within the plumbing market, and their model, the ASCENTII-ESW, is no less exceptional. It comes with all the necessary hardware components one would need to install, and if any of the components wear out and/or need to be replaced, detaching and reattaching are made easy, as you won’t have to rearrange the entire system to do so! 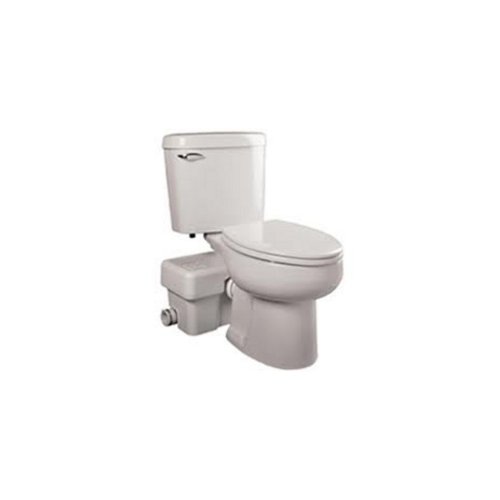 Also, to aid with toilet maintenance in general, the Liberty Pumps ASCENTII-ESW model comes with a service panel to use during and after installation.

Another good model for a macerating/Upflush toilet would be the Thetford Macerating Elongated Toilet Kit. It’s pretty nifty, especially since it takes away the hassle of installing a permanent toilet in the bathroom’s vicinity. It can easily be connected to your house’s plumbing system, so there’s no need to also have an independent piping system for it. 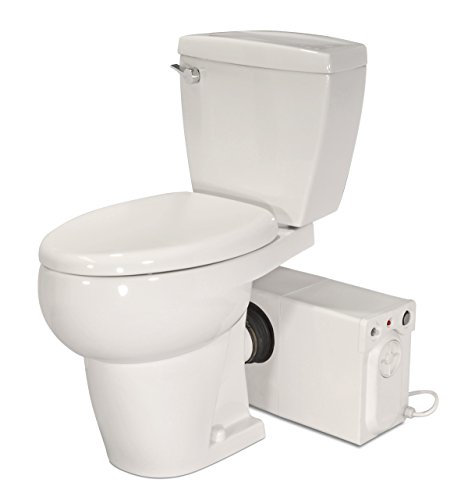 The easy installation only requires the parts to be assembled together and then simply placed in the desired location. Thetford also included an advanced pumping system in the kit, which also has sturdy blades to ensure the efficient maceration of waste in the tank leading to the probability of clogs becoming less likely.

The Saniflo 023 Self-Contained Toilet is another great choice for compact spaces or when wanting to utilize a small space for a bathroom. A nice thing about this model is that one can connect it to current plumbing lines as well as the sink and/or shower through the provided and purposefully designed inlets and outlets.

It is also rather efficient when it comes to water usage, using only a gallon of water per flush, which is significantly less than other macerating models. While it is a bit expensive, it also allows for vertical pumping for a height of up to nine feet.

Trying to decide which of these types of toilets to buy and install for use in a basement bathroom can be tricky, especially since it could also depend on your household’s needs for the bathroom space.

Assuming that your sewage system has an adequate flow and the lines are deep, or deeper than the surface of your basement flooring, a pressure-assisted toilet may be the choice for you. Even though with deeper sewage lines, you could still technically use a gravity flow toilet, with a pressure-assisted toilet in your basement, the likelihood that clogs will happen is minimal since the flush would be powerful enough to send the waste into the sewage lines.

Or, in some cases, it may make more sense to install a Sewage Ejector System. This would drain all of the water from the bathroom and would do so for the sink, showers, and toilet. These systems can go above or underground but can be rather pricey-not to mention installation.

A macerating/Upflush toilet doesn’t need a Sewage Ejector System since a pump is already a part of the system with these toilets. It’s a self-contained system, so you don’t need any additives for it since it’s its own separate unit. There’s no digging involved either, since all the pipes would run through the walls and/or the basement ceiling, if need be, and will attach to already existing septic or sewer lines.

However, most macerating toilet systems only take care of themselves so you would need the ejector system for sinks and showers in the basement.

No matter which toilet system style you choose, follow the care instructions given with whatever system and model you choose. That will make maintenance easier and cheaper to keep up with as well as any odors that could come from using the wrong type of cleaning products. Clogs are still possible, even though both systems do their best to limit that possibility. (Source)

So, try not to flush anything other than human waste and toilet paper to further prevent clogs from happening. If by chance clogs still do happen, a reliable plunger is always handy to have nearby, particularly within the bathroom itself, whether in a cabinet or next to the toilet if there is any available space.