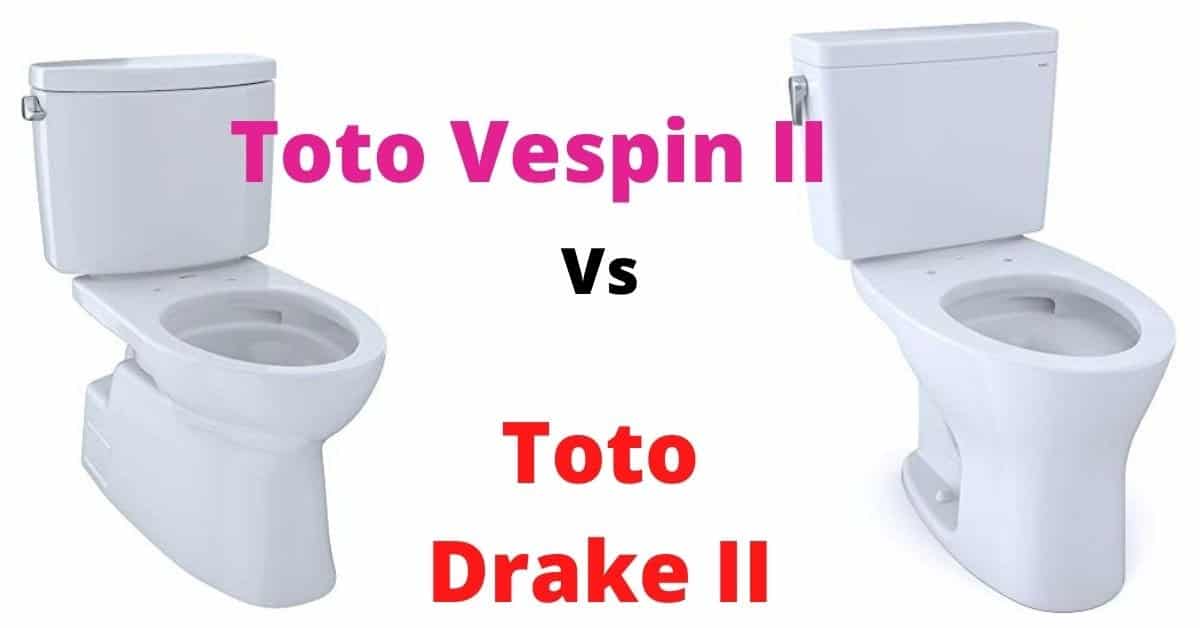 Which is Better, Toto Vespin II or Toto Drake II?

Toto toilets are without a doubt some of the best flushing toilets in the market. There are however so many Toto toilet models and choosing the right one not always easy.

What is the difference between the Toto Drake II and the Toto Vespin II? Which one of these 2 toilet models should you buy? Those are are the questions I will be answering on this post.

Toto Drake II is a single flush two-piece elongated and comfort height toilet. It is the upgraded version of the original Toto Drake.

These states (California and Texas) requires that each toilet sold have a rating of 1.28 gallons of water or less.

Is there any other difference between Toto Vespin II and Toto Drake II apart from their bowls being either skirted or non-skirted that set them apart? What else should you know before making your final purchase?

Let us look at all their similar and different features and specifications.

Toto uses 2 different types of flushing system to describe a toilet. The first one is based on how much water the toilet consumes per flush and the second is based on how the water enters the bowl from the tank.

Both Toto Vespin II and Toto Drake II uses Toto’s tornado flushing system. This system involves the use of two nozzles on each side of the toilet bowl instead of the usual rim holes all around bowl rim.

During flushing, water from the toilet tank enters the bowl through this nozzles, vortexes around the bowl like a tornado before flushing the waste away. Apart from being one of the best flushing system, the tornado flushing system is also very good in scrubbing and rinsing the bowl.

Both Toto Drake II and Toto Vespin II use 1.28 gallons of water per flush and can hence be sold all over the United States. They are compliant with the requirements of both EPA’s WaterSense and CalGreen.

Due to their low water consumption, both of these toilets fall under the Toto E-Max flushing system.

In short, neither the Toto Vespin II nor the Toto Drake II toilet is better than the other in terms of flushing power. Both of them have equal flush power.

The surface of both of these toilets is coated with Toto’s Cefiontect glaze. This inhibits the adherence of waste on the toilet making cleaning them a breeze.

As started earlier, a toilet’s rough-in is measured from the wall behind the toilet to the center of the toilet’s drainpipe. It is very important to measure your bathroom’s toilet rough-in before buying a new toilet.

Toto Vespin II is therefore the best toilet option for anyone with a non-standard 10 or 14-inch rough-in old toilet that they need to replace with a modern, water-efficient and powerful flushing toilet.

Other than the toilet rough-in, there are other toilet dimensions that are vital to know before buying a toilet. You want to be sure that the toilet you will be buying will fit in the space you have in your bathroom.

Both the Toto Vespin II and Toto Drake II have equal depths, total heights and toilet bowl heights. Their widths are however slightly different.

Although these toilets are sold without a toilet seat, their seat height will increase to 17.25 inches once the seats are installed. They are therefore comfort height toilets and hence comply with the requirements of the Americans with Disabilities Act (ADA).

Toto Vespin II is more expensive than Toto Drake II. Apart from the total cost of the toilet, you will also have to buy the unifit adapter if you have a non-standard rough-in toilet, and want to buy the Toto Vespin II.

Another cost you might not have thought of is the cost of installation. It is easier to install the Toto Drake II than the Toto Vespin II. In fact all skirted toilets are hard to install.

Due to this fact, most buyers of skirted toilets like the Vespin II often prefer hiring a plumber to install it instead of installing it themselves. This brings in an extra cost.

Although it is often said that beauty is in the eyes of the beholder, there is more consensus in this case that the Toto Vespin II is more attractive than the Toto Drake II. This is due to the fact that the Vespin II does not have the crevices found in the Drake II but rather has a smooth mirror-like skirt which bounces off light and hence glows.

On the same light, I will also add that it is also way easier to clean the Toto Vespin II compared to the Drake. There are less spaces for dirt to hide and accumulate in the Vespin II which is not the same case with the Drake II.

Both the Toto Vespin II and Toto Drake II are excellent toilets. They have a powerful flush and are from a reputable toilet manufacturer. Buying either of the 2 will be a great choice.

Although I said that the Vespin II is more attractive than the Drake II, than is not to mean that Drake II is an ugly toilet. It is actually one of the best looking toilet in the market, just that I feel the Vespin II is slightly better looking.

For those who would like a little bit more luxury, I would advise that you buy a toto bidet seat (also known as a washlet). You will completely get rid of toilet paper from your bathroom and bidets in any case does a way better job than toilet paper.

Author: toilethaven
Filed Under: Uncategorized
Why Your Toilet Bubbles When The Bathtub Drains-Easy Fix
Toto Ultramax II vs Toto Drake II – What to Know Upfront
Searching is in progress