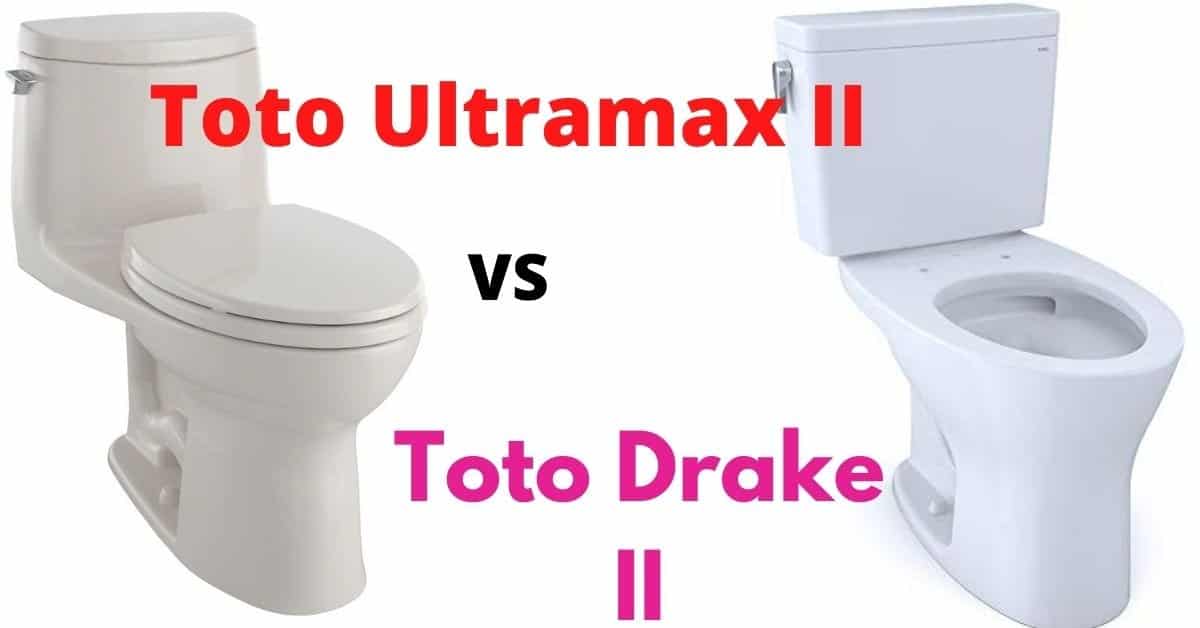 Toto Ultramax II is one of the best toilets not only among other Toto toilets but in the entire toilet industry. Apart from being so sleek, it is also a very powerful flushing toilet.

People looking for a powerful flushing one-piece toilet often find themselves torn between the Toto Ultramax II and the American Standard Champion 4.

One thing that makes Toto Ultramax II appeal to more toilet buyers is due to its low water consumption but still a powerful flush. It is also very effective in bowl rinsing compared to other toilets.

If I were looking for a strong flushing two-piece toilet then it would definitely have to be the Toto Drake II. Toto Drake toilets are actually well known for their high flushing power thanks to the G-Max flushing system.

There are 2 toilet models than compete with the Toto Drake II in the two-piece toilet category out of the Toto brand. This are the Kohler Cimarron and American Standard Cadet 3 FloWise. I would still choose the Drake II out of 3 toilet models.

Toto Ultramax II vs Toto Drake – The Pros and Cons

Toto Ultramax II and Toto Drake II have so much in common than their differences. Let us look at their features and specifications as well as advantages and disadvantages.

Toto toilets are classified in 2 different types of flushing system. The first classification is based on how much water the toilet consumes per flush and the second is on how the water is delivered from the tank to the bowl.

Since both Toto Ultramax II and Toto Drake II are high efficiency toilets with a consumption of 1.28 gallons per flush, they fall under Toto’s E-Max Flushing system.

Toto Ultramax II and Drake II’s toilet bowls uses 2 powerful nozzles instead of the usual rim holes. Water from the tank enters the bowl through this 2 nozzles forcefully, vortexes around the bowl and is then flushed down with all the bowl’s content.

Apart from being a powerful flushing system, the Tornado flush system is very effective in cleaning the bowl. The whirlpool formed by the water in the bowl helps to scrub and rinse it.

Apart from their black toilet models, all the other models of the Toto Ultramax II and Toto Drake II are coated with Toto’s Cefiontect glaze. This makes it hard for waste to stick on the toilet making cleaning them a breeze.

The truth of the matter is that both toilets have their advantages and disadvantages. Let us look at some of them.

The first thing is the shipping process. Once you buy a one-piece toilet (in this case the Ultramax II) it will be delivered in one big box. Two-piece toilets are usually delivered in 2 separate boxes. There are normally no guarantees that both boxes will arrive at the same time.

One-piece toilets look sleeker and modern while two-piece toilets have a more traditional look. I would therefore say that the Toto Ultramax II is more visually appealing than the Toto Drake II. This does not however mean that the Drake II is ugly.

I have written a whole article explaining the pros and cons of one-piece toilets vs two-piece toilets. Read it here.

It is exceedingly important to note down the dimensions of a toilet and compare them with the space you have in your bathroom prior to buying it. There is nothing worse like buying an expensive thing like a toilet which you can’t install.

The most important toilet dimensions are:

The dimensions of the Toto Ultramax II are

The dimensions of the Toto Drake II are:

Toto Ultramax II as is the case with most one-piece toilets is more compact than the Toto Drake II so if your bathroom needs that extra inch you know what toilet to buy.

Both of them are however comfort height toilets. With the addition of a toilet seat, each toilet’s seat height will be 17.25 inches, which is very comfortable to sit and stand from.

They are therefore compliant with the requirements of the Americans with Disabilities Act (ADA). Read more on the pros and cons of comfort height vs standard height toilets here.

The rough-in of a toilet is a very important dimension that you should measure prior to buying a toilet. It is the distance between a toilet’s rear wall and the center of its drainpipe. Sometimes the rough-in is take from the wall to the toilet bolts as they are at the venter center of the drainpipe.

Toto does not manufacture toilets with non-standard rough-ins. What they have instead is skirted toilets which with the help of an adapter can be converted into either 10 or 14-inch rough-in toilets.

Both Toto Carlyle II and Toto Vespin II have a rough-in of 12 inches only that with the help of a an adapter they can be converted into either 10 or 14-inch rough-in toilets.

If you would fancy a skirted toilet then I would advise you to check out these 2 toilets. They have the same features as Toto Ultramax II and Toto Drake II save for the skirted bowls.

The Toto Ultramax II costs slightly higher than the Toto Drake II. This is also something you will notice while comparing one-piece and two-piece toilets of the same features and specifications.

From Toto’s Website, You will see a difference in price of 200 dollars between the Toto Ultramax II and Toto Drake II. This is not a small amount of a money and it can influence your toilet choice as there is not a difference between the 2 toilets in terms of performance.

I should also add that Toto Ultramax II comes with a soft close toilet seat while the Toto Drake II is sold without a seat. You will hence need to buy a seat separately, which will increase the quoted price of the Drake II.

After you have bought and installed the toilet, Toto Ultramax II will have fewer repairs and therefore is much easier to maintain. One problem with two-piece toilets (in this case Toto Drake II) is that they start leaking between the bowl and the tank.

This is caused by loose or worn out tank bolts and/or washers or even the tank to bowl gasket. When this happens you will have no option but to remove your toilet tank, replace the parts then install the tank back.

If you can’t perform this kind of repair on your own it means you will need to hire a plumber. Plumbers are not very cheap.

Toto Ultramax II being a one-piece toilet has no tank bolts or tank to bowl gasket hence will never leak there. All the other repairs will be inside the tank and are actually very easy to do on your own.

Toto Ultramax II is way easier to clean than Toto Drake II. This is true for all one-piece toilets especially if they are both one-piece and skirted like the Toto Carlyle II and Woodbridge T-0001.

There is seamless connection between Toto Ultramax II’s tank and bowl unlike in the Toto Drake II which has a tiny gap. Dirt will therefore have nowhere to hide in the Ultramax II but the same cannot be said of the Drake II.

If you want to spend as little time as possible cleaning your toilet then the Toto Ultramax II is the toilet to go for.

The downside to installing the Toto Ultramax II is that it is quite heavy and you may need an extra pair of hands to help you with the lifting. Attempting to do it on your own might be risky since you can easily drop and break it.

The advantage of installing the Toto Drake II as is the case with all two-piece toilets is that one person can comfortably install them. The tank and the bowl being different pieces are lighter to lift than the whole Toto Ultramax II.

So, what are the other toilets models that would be a decent replacement for either Toto Ultramax II or Toto Drake II?

These are the toilet models which I feel would a good alternative to Toto Ultramax II. The 3 of them are also one-piece toilets:

American Standard Champion 4 is one of the most popular toilets not only amongst American Standard toilets but also across the board. It has a 4-inch wide flush valve which dumps water into the bowl faster resulting in a forceful and powerful flush.

It costs slightly less than the Toto Ultramax II but consumes more water per flush. The 1.6 gallons per flush rating means it does not comply with the requirements of bodies like WaterSense and CalGreen and as such cannot be sold in place like California and Texas.

Other than that, the Champion 4 is a great toilet. Check it out here.

Woodbridge T-0001 is a one-piece, dual flush elongated and full skirted toilet. It is a beautifully designed toilet that also flushes amazingly well. Check it price and reviews here on Amazon.

Kohler Santa Rosa is a one-piece single flush and elongated toilet with a comfort height. It uses Kohler’s AquaPiston flushing technology which is quite strong. Check its reviews and amongst other Kohler toilets in this post.

Both Toto Ultramax II and Toto Drake II are excellent toilet options. Personally I would go with the Toto Ultramax II as I am big on aesthetics and therefore really like its sleek appearance. I would be happy to pay the extra money to end with it.

For people who only care about performance and not so much on appearance then the Drake II will suffice. Whichever toilet you decide to buy you will be happy. You can hardly go wrong with a Toto toilet.